In my quest to try as many Dogfish Head beers as I can find, I’ve managed to get my hands on a four-pack of Olde School barleywine-style ale. Barely. One of the local bottle shops here in Charlotte posted on Twitter that they had gotten a couple of cases in that day, and when I showed up roughly two hours after the tweet was posted, they had one solitary four-pack left, so I made it mine. So what is it, exactly? It’s a barleywine-style ale, as I’ve already mentioned. Specifically, it’s a big, fruity barleywine-style ale. And I do mean big. And fruity. The fruitiness comes from the fact that it’s brewed with figs and dates, which, quite frankly, are a perfect match for a barleywine-style ale and make for a lovely winter beverage. The bigishness comes from an absolutely whopping 15% ABV, which makes this legally the most potent beer the nanny-state government of North Carolina will allow to be sold here. The nose is rich with fig and plum notes, and even the alcohol comes through, which is pretty unusual for a beer. The body is heavy weight, and the middle is syrupy and sweet with flavors of raisins and dates, and brown sugar. The finish is sweet and warming as the alcohol comes back through again. I like a good barleywine-style ale, but I generally don’t love them. This however, is an outstanding beer and can even reasonably stand in the stead of a stiffer drink on a cold winter’s night. 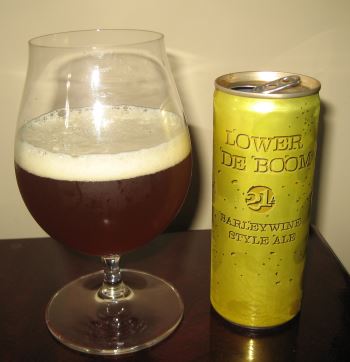 A barleywine style ale from California’s 21st Amendment Brewery, Lower De Boom is a big beer in a small can. A Red Bull® sized 8.4oz can to be exact. I can’t say for sure, but I speculate that the smaller can size is in consideration of this brew’s equally massive alcohol level of 11.5% ABV. The overall character of this beer is big, heavy, and boozy. The nose has licorice and fruitcake, and alcohol. The middle has toffee, a lot of citrus, both orange and lemon, and a ton of alcohol. The finish is sweet and it has a bit of toast, raisins, more licorice and a bit of heat right at the end from, you probably guessed it, the alcohol. This is a beer that you want to use as a digestif, and sip it slowly. When you do that, you get the chance to savor all of the rich and varied flavors, and enjoy a particularly excellent beer.

While Green Flash is known for their big hoppy ales, that doesn’t mean that they can’t do a top notch job with a big malty barleywine as well. I’m trying the 2013 vintage today, and there’s nothing crazy here, just all of the characteristics of a reference barleywine, with perhaps some influence from a Belgian Strong Ale. They claim that there is an “enormous charge of Pacific Northwest hops” that give it hoppy citrus characteristics throughout, but I’m simply not finding that to be true of the 2013, though it may have been true of earlier vintages, or it may just be that my bottle has been around long enough that the hop notes have started to break down, which happens after a few months. That said, what’s left is a great malty brew. The nose is rich and warm with brown sugar, raisins and figs. The middle is heavy and sticky and bursting with dark fruit, raisins, plums, figs, grapes, some caramel, and a mild heat from the alcohol as well. The finish is sugary and syrupy, with some slight toast and very faint hints of sweet citrus (orange and grapefruit) in the background, but not enough to take the focus off the heavy malt backbone. The body is heavy, and this is quite a big beer at 10.9% ABV which shows through in the middle, but not at all unpleasantly. To be honest, I wasn’t expecting to be wowed by this beer, but I’m thoroughly impressed.

Old Ruffian is a medal-winning barleywine ale from the Great Divide Brewing Company out of Denver, Colorado. They say that it’s hop-forward, but this is no West-Coast IPA. It pours a rich, semi-translucent copper with a thin head, which is to be expected from a barleywine as they are only lightly carbonated. The nose is sweet, with notes of dark fruit (figs and raisins) and toffee. This is a well hopped ale, and the sweet caramel and sugary fruit in the middle is beautifully balanced by the strong hoppy citrus notes of orange zest. The malt comes back to the fore in the finish with brown sugar and plums, and a bit of heat from the alcohol right at the last. The body is heavy and the alcohol is high, at 10.2% ABV. Barleywines aren’t my favorite, but this is an outstanding example of the style with enough hops to make it enjoyable to any palate. This is a very fine beer.