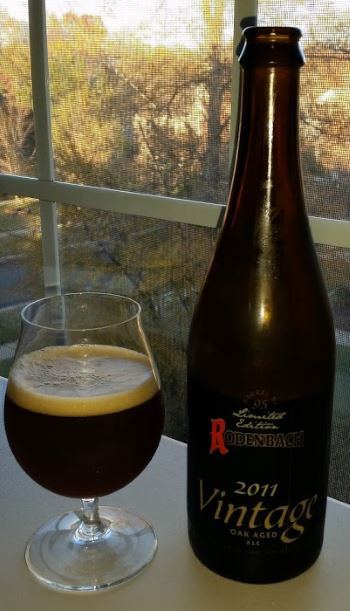 And the hits just keep on comin’. Brouwerij RODENBACH selects a single oak cask of their Flanders Red Sour Ale that, after having matured for two years, has produced the best beer, and bottles and labels the beer that comes out of this cask as their “Vintage” for year. In the case of 2011, this is cask number 95. The nose is floral with honey and faint wild yeast, the middle is tart with cherries and strong plum flavor. The finish is sweet, with the sugars coming back to the fore and tamping down the tartness, but the flavors of cherries, plums, and green apple are still consistent and dominant. The oak is quite subtle, and I suspect is responsible more for maturing the flavors that already exist in this intensely flavored sour than for adding new flavors of its own, though there are tiny hints of vanilla in the finish. This is not a particularly big beer at 7.0% ABV, or a heavy one, but it is exceptional. It should be on every sour lovers list.

So Allagash is one of my new favorite breweries, and Curieux is a perfect example of why. They’ve started with an excellent-in-its-own-right Tripel Ale, and aged it to perfection in Jim Beam bourbon barrels, then blended with fresh Tripel Ale. Because of that last step, this is not one of the many bourbon barrel ales that come out of the process harsh and boozy, packing a punch but not a lot of sophistication. The nose is light and fruity with banana, peach, a hint of pineapple and vanilla. The middle has some heat from the copious alcohol (this beer is 11% ABV) and notes of coconut, banana, and papaya. The finish has a spicy pepper bite that mellows into a soft vanilla on the back of the tongue. This is a medium weight beer, so the body is not particularly heavy but it’s still advisable to use a snifter or other glass that will allow you to appreciate a smaller pour due to the 11% ABV alcohol level. This is an amazing beer, and it’s available year-round, so if you can find Allagash in your area, look for this one.

OpenCraftBeer has a new home as of 3:00AM this morning, give or take an hour.   It’s not a drastic change like the last move; this one should be transparent.  However, these things always leave often the possibility of little details missed, or minor issues, so if you see something, don’t hesitate to drop me a line at xander.sherry@gmail.com.

Moylan’s Brewing Company of Novato, California is a specialist in big beers, be they Imperial IPAs, Scotch Ales, or Barleywine-style ales. (Among others.) However, they felt they hadn’t taken the Imperial IPA theme quite far enough, and perhaps to rectify that, a Quadruple IPA might be in order. Thus, we have Hop Craic, a American Quadruple IPA. This is a massive IPA in every measure. It’s got a heavy body, the alcohol is a stout 10.4% ABV, and the hop notes are huge and balanced with strong malt flavors. The nose is strongly orange citrus but with a bit of molasses in the background. The middle bursts with lemon and orange, followed by pine, but then transitions into a heavily malty finish with notes of toasted grain and packed with brown sugar and syrup. The end of the finish is burned toast and pine. It’s exceptionally well balanced for such a powerful beer, and I’m enjoying it immensely.

Rosabi is an Imperial Pale Ale from Dogfish Head with, as the name suggests, wasabi as the off-centered ingredient. It starts with a big sticky head that hangs around for a bit. The nose has a bit of pine, grain, and citrus, and wasabi hits your nostrils faintly right at the end as the other scents are fading. The middle is a big chewy Imperial Pale Ale, with citrus and honey, fading to pine and rind in the finish. The coup de grâce, however, right at the tail end, is strong wasabi. It’s not particularly hot, but that unmistakably pungent flavor is in full force and it strengthens as the beer warms. The body is medium to heavy, and the alcohol is 8.0 ABV, so it lives up to the “Imperial” billing quite well. It’s a bit of a oddity, and certainly not an every day beer, but it’s worth a try, especially for those of you who love wasabi as much as I do.